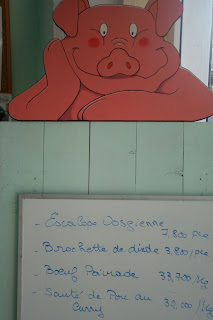 We came to Tunisia last August with two suitcases each, fully aware that our “things”, meaning our shipment, might not arrive until the end of October.  That sounded insane and we thought our employer was being overly cautious with that ETA to spare us any disappointment, but still, we bore it in mind.  Knowing it would be really hot for at least a couple of those months, I packed plenty of flippy cotton skirts, sleeveless shirts, and sandals.  And then mid to late October arrived and a cool beam shot through the Mediterranean sea breeze and suddenly, I missed pants.  And pork.
I hadn’t even mentioned pork to anyone because I knew it was impossible.  Having just moved from a Hindu country, where we ate buff or yak, never beef, I was well aware that certain cultural rules don’t bend.  But somehow, I did mention to a friend that I missed bacon and he said you can have it and he gave me the directions to a French charcuterie, which sounded interesting except I knew the location.  It was sandwiched right between two motorcycle shops on a busy, dusty highway.  It sounded unlikely to me that this was going to be good and I know better than to take a risk trying out something on the fringe in a town when I’m deep in the throes of culture shock, so I didn’t stop in.  And then one day, I think after repeated praise from various expats, we went in and I swear I heard angels singing when I opened the door.  The tiny space sparkled with surgical cleanliness, but the homemade specialty foods were cozy and charming.  Hanging in the back case was what we had come for:  smoked pork and the woody, salty scent clung to our skin even after we had left the shop. 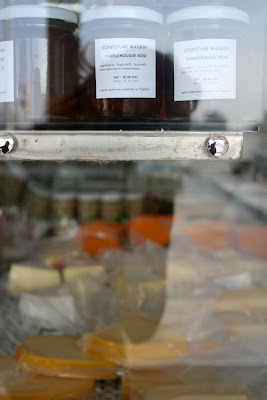 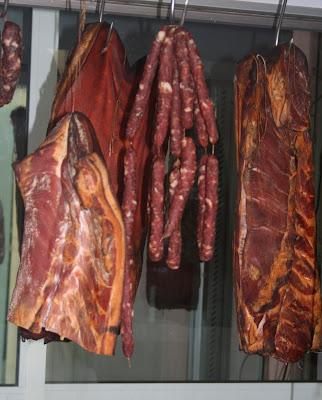 The proprietress is a French woman who doesn’t mind if you practice your French with her a little, but then switches to perfect English when the ordering begins.  I like that a lot.  You just point to everything you want and she semi-circles around you packaging it up:  a side of baby pork ribs, duck legs and thighs confit, a jar of house made artichoke sauce, and a lasagna for the freezer for a night when we’re too busy to cook.  Some of her products are imported from France, but all of the pork is produced in a town south of Tunis and of course the cooked foods are made right on site. 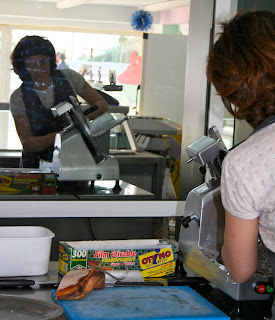 And so now we have it all here in Tunis since we’ve found Le Petit Coin De France or the little corner of France and believe me we go there regularly for a little shot of happiness.  By the way, that shipment didn’t arrive until December.
This piece is not for my lovely friend Cindee who is moving here from Romania and reveres pigs.  Cindee, we’ll find other things to talk about .