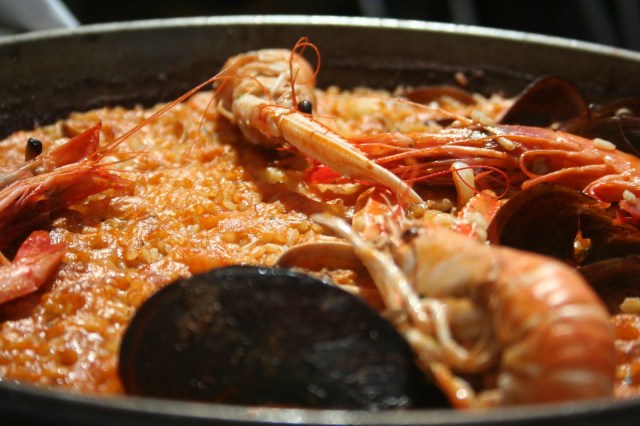 It’s not one bit original or surprising to lead off a series of blogs written from Barcelona with a paella, but paella happened today.  I haven’t eaten paella in a long time.  I can say almost exactly how long:  pretty much 19 years and 9 months.  The last time I ate paella, I was approximately three months pregnant with my second baby, who is 20 today.
When I was a younger woman, I really wanted to learn some serious cooking skills so I used to give myself cooking school assignments on Saturdays.  An example would be, today I shall spend 16 hours replicating James Beard’s recipe for puff pastry.  I kept that sort of thing up for many years.  One Saturday, I determined that it was the day to make paella.  As I said in the intro. I was about three months pregnant with my Anton.  I can’t claim to have suffered greatly from morning sickness in my pregnancies, but I was still in the soda cracker munching stage.  Being a determined woman, however,  paella it would be.  I bought the dearly priced ingredients and set to work.  My feet got heavier and heavier as I prepped all of the various ingredients and began to execute the finely timed dish, adding the precious saffron at just the right time.  I don’t recall that I had ever actually eaten saffron prior to making that dish so I didn’t know what to expect.  If you know it, it is a difficult spice to describe.  It’s slightly floral in a musty kind of way.  It’s strong and peculiar and it didn’t sit well with my first trimester digestion.  I didn’t throw up, but I did create an aversion that lasted for about 20 years.  I didn’t really think I could like saffron anymore, but I love the idea of saffron, like I love the idea of anchovies, which I can’t stand.  But today, when we sat down at a beautiful harbor side café for lunch and smelled the mingling seafood and saffron, there was no question that paella for two would be our order.  The saffron was subtle and perfectly balanced with the seafood and rice and I didn’t hate it one bit.  In fact, I will have much more.
Happy birthday week to my babies, Gabe and Anton, who I miss with every bite.