One of the “must dos” when in Barcelona is to study the works of the Modernista architect, interior designer, and artist, Antoni Gaudi.  Living in Catalonia between 1852 and 1926, he is Barcelona’s native son.

To understand the context of his work you must learn something about the Modernistas in Spain.  This was a social movement at the end of the 19th century that had an element of reaction to a perception that Spanish, particularly Catalonian, culture had fallen behind that of its European neighbors in sophistication and innovation.  Catalonian artists, writers, and architects were inspired to create, making references to Gothic and Islamic architecture, but personalizing and humanizing those styles. The Modernistas incorporated motifs from the natural world, such as plants and other organic shapes, similarly to what was taking place in the Art Nouveau or Arts and Crafts Movement in the US and other parts of Europe.

Even today, his works are slightly unsettling.  I can’t even imagine how they were received in his time.  When I look at synonyms for ornate, the following are listed: elaborate, flowery, florid, grandiose, pompous, pretentious, high-flown, orotund, magniloquent, grandiloquent, rhetorical, oratorical, bombastic, overwrought, overblown and every one of them seemed true of his work, even the ones I’d never heard of before.  But walking around the Park Güell and entering his fantasy of a cottage on the site, a definite peace and serenity transpired.  There is a balance, even if it is not symmetry. 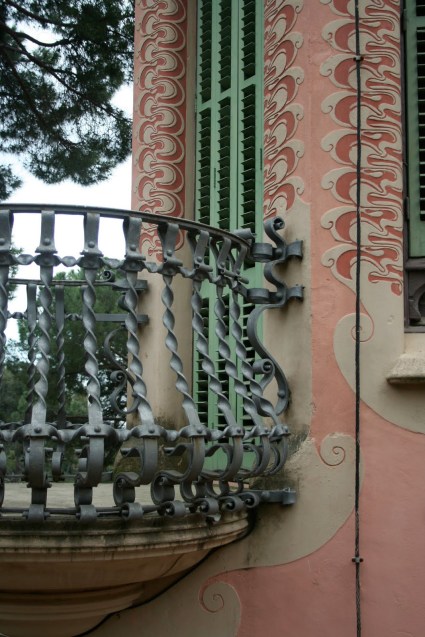 I admire Catalonia for its inspiring natural beauty, for being an open society where a man like Gaudi could express his passions and vision in a huge way (see Sagrada Familia), for not tearing these buildings down when they went way out of fashion, and for funding and even continuing to add to them today.
And then, of course, we had lunch, at 3:00.