Skip to content
@font-face { font-family: “Times”;}@font-face { font-family: “Cambria”;}p.MsoNormal, li.MsoNormal, div.MsoNormal { margin: 0in 0in 0.0001pt; font-size: 12pt; font-family: “Times New Roman”; }div.Section1 { page: Section1; }
From the first bites we put in our mouths, we want to be open to altering our perceptions of “real Italian food”.  I often get “heavied” out with Italian:  too much sauce, too hearty of pasta, too much cheese or cured meat.  I have to admit that I don’t cook that much classic (or is it just American)  Italian, because I just don’t usually have the appetite for it.  But when I’m actually in Italy, I don’t find the food like that.  Pizzas are cracker thin with a few shavings of parma ham, a pile of rocket, and a dusting of Parmigiano Reggiano.  I could eat a whole one myself, each day I’m here.
Our first meal on this trip began at the trattoria Colline Emiliane, near Bernini Square.  This compact restaurant represents the regional cuisine of Emilia-Romagna, capital city-Bologna. The area has several culinary claims to fame, among them, Parmesan, balsamic vinegar, Bolognese sauce, and Parma ham. I can hardly imagine Italian food without all four of these staples.

Being a rain showery, spring Friday, we began with a soup:  “dumplings stuffed with meat in broth” was all we knew.  When it arrived, we were a little surprised to see about 40 tortellini floating in beef broth.  That was a heartier dish than we had intended to start with, but scooping in, the tortellini were not heavy, cheesy lumps, but light little pillows that melted in your mouth leaving a lingering taste of mild beef broth scented with nutmeg.  We ate them all; it wasn’t a problem.

Next, came the real pasta we had ordered, tagliatelli with ham and asparagus.  Again, it wasn’t thick ropes of noodles, but almost transparent strips that at moments made me think of eating Asian rice noodles.

Dessert isn’t always my favorite part of the meal and I don’t often even have dessert, but their freshly made sweets were on display as you entered the restaurant and in fact, to order one, you had to get out of your chair and go point to the one you wanted.  You knew that when an item was all served up, that was it for that day.  I got the first serving of the pear tarte tatin with pine nuts and currants. 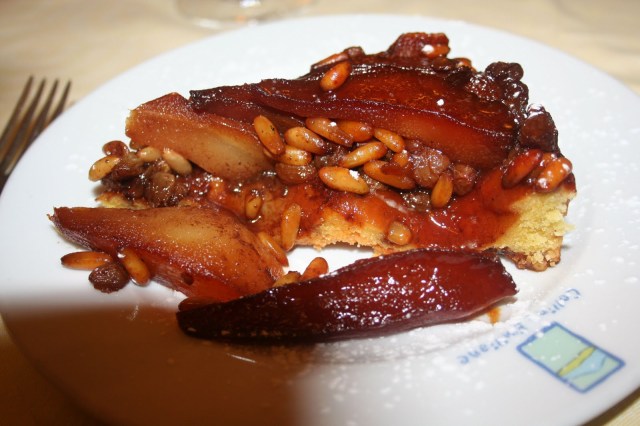 This is a dessert I would like to add to my repertoire as a standby.  The almond crust was barely sweet and with the chunky bites of nuts and pears, you almost felt like you were eating a side dish and not a dessert.  The pears, however, were buttery and caramelly, making it a definite dessert.  It was such an elemental dish that I do believe I will be able to replicate it at home, layer by caramelized layer.