Skip to content
@font-face { font-family: “Cambria”;}p.MsoNormal, li.MsoNormal, div.MsoNormal { margin: 0in 0in 0.0001pt; font-size: 12pt; font-family: “Times New Roman”; }div.Section1 { page: Section1; }
We really needed to get out of our routine this weekend, get into the countryside, feel some earth and rocks.  Douga was the perfect destination.  Theoretically less than 2 hours southwest of Tunis, Douga is a significant ancient archaeological site.  I say theoretically because we can never seem to find our way out of Tunis to the A-3 highway that leads straight to this ruin.  We even called two friends before leaving, one a life-long resident of Tunis, and both of them were sketchy about the directions.  So once again, we inched our way along the map, trying to decide if the phonetic Arabic names on signs might be the Engish spelled names on the map.  It was all good, however.  We had a tank full of gas and a wonderful picnic lunch and it didn’t exactly matter if we ever actually got there or not.

Did you catch the “once again”?  Ya, this isn’t our first attempt at Douga.  We tried it a little over a year ago when our sons were visiting from the US.  We had the day off of school because of the Aid holiday and decided to make the daytrip to Douga.  It never crossed our minds that the site would be closed for the holiday, which it was, but after the many hours of backroad sidewinding it took us to get there, we weren’t leaving without at least a little peek.  The four of us scaled a sandstone hillside and had about 30 seconds of a view of the remarkably well-preserved theater when a guard blew a whistle at us and began chase.  We ran like middle-schoolers back down the hillside to our car and screeched away.  And that was our memory of Douga. 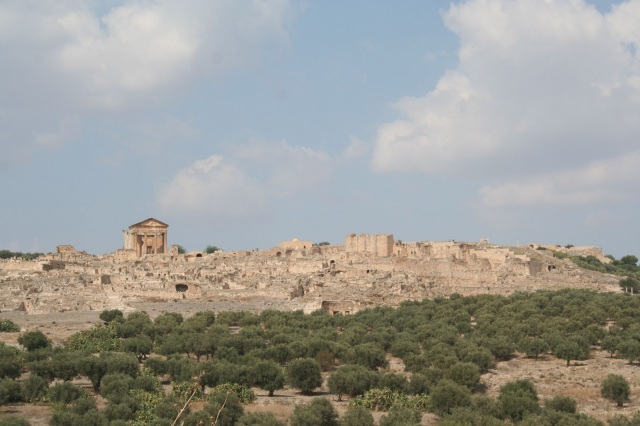 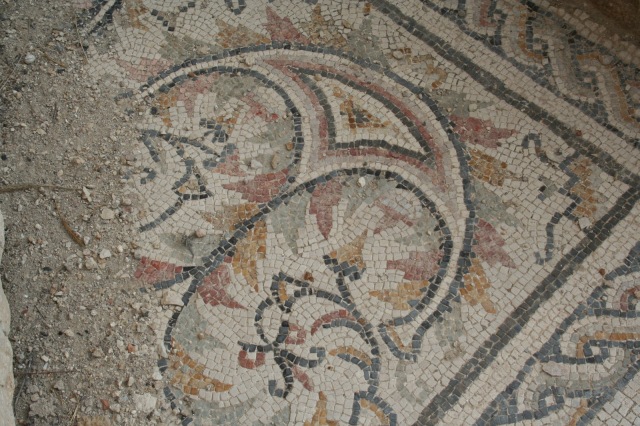 It’s a good thing we didn’t see the entirety of this site during that preliminary glimpse or we would have been too depressed.  This is a large ruin with many intriguing carvings, sculptures, and mosaics.  The most impressive part, however, are the soaring pillars framing the spectacular Tunisian farmlands.  All day, our breath was taken away by the rich soiled fields in various states of cultivation all over the countryside.  “The breadbasket of the Roman civilization” is not hyperbole.  Tunisia is blessed with ongoing plots of farmland and they know well how to sustain it and get perfect yields from it.

So it was a healing day.  We got reconnected with our host country, with the land that grows our healthy food, and enjoyed some warm fall sunshine.  After seven hours of driving… do the math… we were finally getting back into town when Kaye Syrah called to spontaneously invite us to a home cooked dinner.  Great life, right?