Today is Eid al-Adha in the Muslim world.  This day involves the sacrifice of a sheep and a celebration of God’s provision of the lamb in the story of Abraham’s sacrifice from the monotheistic texts.  I have the wonderful opportunity this year, in my new humanities class, to take an in depth look at the path of monotheism through history and I am learning more than I anticipated.

In August, I was visiting our renown Bardo Museum in Tunis which reputedly holds the world’s most vast collection of mosaic murals.  We came to this tile and our guide casually explained it as the sacrifice of Ishmael. 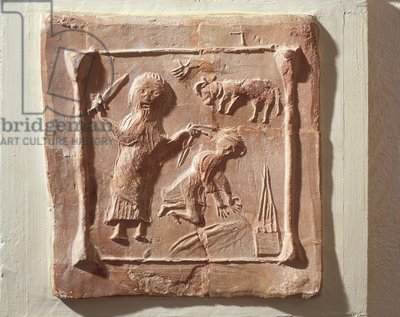 “You mean the sacrifice of Isaac,” I corrected.

“I am speaking from my cultural point of view,” he countered.  And that was the first I had heard of that.  Muslims, maybe some and maybe all, believe that Abraham almost sacrificed Ishmael, upon God’s instructions, and not Isaac.  See how culturally insulated I have been to not know that until now?  People talk a lot, me included, about the common lineage of the three monotheistic faiths, but as I am getting into it, with classes of students reared in all three faiths, I am learning that there are distinctions that may not be so slight.

As Allan and I have traveled around the world this past decade plus, we have noticed the theme of blood sacrifice from culture to culture.  Singapore was the first time we ever encountered the actual ritual sacrifice of animals.  We were taking some out of town guests on a tour of the quay area, a very touristy part of the city.  Walking past the urban mosque, we noticed that the courtyard was jam-packed with sheep.  Livestock not being a familiar sight, we took a peek through the gate.  A man greeted us and invited us in, explaining about this celebration of slaughtering sheep in honor of the sheep God provided Abraham to reward his obedience and spare him the killing of his son… whichever one that was.  The meat is then eaten in family feasts and also shared with the poor, one of the five tenets of Islam.

Something fairly similar takes place in Kathmandu, a Hindu nation.  In the fall, during the Dashain holiday, goats are brought into the city by the hundreds of thousands.  Every household that can afford one takes one home, transporting it any way they can which may be in the trunk of a taxi or held by the wife on the back of a motorcycle.

Allan’s first autumn as director of the Lincoln School, we were specially invited to school for the goat slaughter.  We arrived on campus, early in the morning, to see all of the school vehicles and everything else motorized such as the lawn mower and power tools washed and laid out on the basketball court where they would later receive a blessing of a little blood and a tuft of goat hide.  Our friends from school asked us to accompany them to the small Hindu temple behind the school gates.  There, our transportation director, who was also the Hindu priest of his village, conducted the ceremony.  He brought a goat down the steps into the shrine where 8 to 10 Hindu gods were carved around the perimeter.  He then sprinkled a handful of water on the goat’s back.  Someone explained to us that when the goat shuddered to shake off the water, it was an indication that he was ready to become the sacrifice.  As predicted, this goat did shudder and immediately, Rajendra took his super sharp knife, cut the juggler vein in the goat’s neck and opening the head from the body, like some sort of machine gun, sprayed the goat’s throbbing blood across all of the statues in the temple.  We were stunned and nauseous.  I had to look down and noticed a tag on the shirt of a little neighborhood girl that said Hanna Anderson.  You might know that as a Swedish manufacturer of extremely precious children’s clothing, no doubt donated to Nepal by some charitable organization.  It was a moment of clashing eras for me, which happened all the time in Nepal.

Some of our expat friends are grossed out by the do it yourself slaughter element of  today, but Allan and I both grew up on farms and we are comfortable with knowing and being thankful for the animals that give their lives to feed us.  We have slaughtered our own Thanksgiving turkeys before and in fact find that to be a sincere and authentic way to ritualize a day of commemoration for sacrifice, provision, and deliverance from struggle.

I actually find today to be quite sweet.  Every family has their sheep and the extended family comes together to prepare and enjoy it with good hearts.  We hear the entire pageant over the garden wall we share with our neighbors.  First, we could smell the sheep last night.  This morning, we heard the kids playing with him, then there was the hour of the bleating, all over the neighborhood.  Soon after, it got quiet and we could smell the charcoal fires lighting up.  Not long after, there was the clanking of dishes mingled with the laughing and talking of children and adults.  They are happy and it made me a little homesick for my family on such a day.

We have these rituals to express things that are mysteries in life.  For reasons we can’t entirely explain, we have what we need, we have largely been spared the most devastating of possibilities and we have people around who buoy us.  We somehow know, whatever our belief system, that God provides.

One thought on “God Provides”